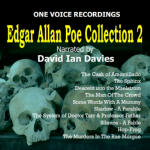 Published By : One Voice Recordings

THE CASK OF AMONTILLADO

The tale of one man's vengeance as he methodically plots and carries out the classically macabre luring of his unsuspecting tormentor, with a disarming air of camaraderie, toward the man's doom.

THE DESCENT INTO THE MAELSTROM
The Moskoe-strom of Norway is a real, terrifying, irresistible Force of Nature.  We are suddenly drawn into it, as the narrator’s guide recounts the experience which turned his raven-black hair white in a day.

HOP-FROG
A pain wracked dwarf, the put-upon servant of a fat, joke-crazy king and his equally obese court, bears continual humiliation as the court jester at the hands of his ‘normal’ captor owners.  A classic narrative of the worm turning.

THE MAN OF THE CROWD
One day in the life of a man whose obsession, as a rich parasite it seems, is people watching – following them and their activities to discover and form judgment upon their place in the world and their morals.  But not every subject may be so easily analyzed and judged.

SOME WORDS WITH A MUMMY
Most enjoyable in its use of humor and irony.  The storyteller, much to his delight, is invited to the examination of an ancient mummy by a team of experts.  But during the unwrapping and probing about, he is suddenly brought back to life!

THE SPHINX
A journey into the mind of one who visits a relative for a fortnight to escape the ravages of disease, only to experience what he perceives as a vision foretelling his own doom as he looks out the window.

THE MURDERS IN THE RUE MORGUE
An absorbing and evocative account of a bizarre crime accompanied by the grotesque, hideously violent murders of several people in the mansion that is the crime scene.  One of this story’s appeals is the detective’s reliance upon logic and forensics that leave his peers looking not terribly competent.  Lovers of Sherlock Holmes, especially, will find much to enjoy in this genius performance by David Ian Davies.

THE SYSTEM OF DOCTOR TARR AND PROFESSOR FETHER
As this peculiar, often comedic story progresses, it becomes increasingly difficult for a visitor to a madhouse to distinguish between the sane and the insane.  Or at some point, has the latter eventually had a cumulative effect upon the former?

SHADOW - A PARABLE
As with “The Sphinx,” Poe’s confrontation with the cholera epidemic finds release as the storyteller couches these fears in poetic terms.  This very dark and forbidding writing speaks of our fears of the unknown and nameless threats and terrors that feed upon our doubts and our uncertainty of what the next hour holds for us.

SILENCE - A FABLE
This short work capsulizes the ability of the human soul to better withstand the forces of nature, of conflict and life in general, than the sentence of silence and loss of contact with the physical world… even with its inherent dangers.