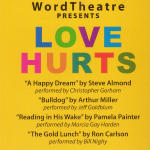 Published By : Harper Collins US

The first in WordTheatre's series, Love Hurts offers up four souls suffering from affairs of the heart. These stories by Steve Almond, Ron Carlson, Arthur Miller, and Pamela Painter will charm you, move you, and leave you wanting more.

In Steve Almond's "A Happy Dream," Christopher Gorham (Out of Practice, The Other Side of Heaven) plays a lovelorn, risk averse sous-chef who, when mistaken for a firefighter by a sassy young woman on a bicycle, quite uncharacteristically goes along for the ride.

In an achingly funny and poignant performance, Jeff Goldblum (Independence Day, Jurassic Park) portrays a thirteen year old who comes of age in the Brooklyn of long ago in Arthur Miller's not quite autobiographical short story "Bulldog," first published in The New Yorker, August 2001.

Academy Award® Winner Marcia Gay Harden (Pollock, Mystic River) slips elegantly into the role of a wife deeply in love with her dying husband on their last days together sailing the seas of literature in Pamela Painter's 2005 Pushcart Prize-winning story "Reading in His Wake," originally published in Ploughshares.

And BAFTA Film and Television Award winner Bill Nighy (Love Actually, State of Play) introduces a new Olympic sport as he battles his ex-wife for the gold medal in Ron Carlson's hysterical story "The Gold Lunch," first published in Ploughshares.

WordTheatre brings people together to share stories in a unique way. Through this collective experience, we aim to deepen our sense of community as we celebrate the oral storytelling tradition. We welcome you to join world-class writers and actors at our literary salons in Los Angeles, New York, and London for live readings and book signings. Visit www.wordtheatre.com for more information.