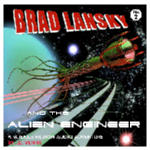 Brad Lansky and the Alien Engineer

After their return from Planet X, Brad and Alex have a tough time trying to get their ship to pass its maintenance review. The alien’s viral onslaughts have left the Full Advantage riddled with software mutations and there are suspicions of even more invasive alterations. Dieter, whom they’d rescued from the moon-swamp at Planet X, is alive but struggling to shake off his infection.

Even though their mission had been highly successful by many standards, no sentient press agents on Earth have shown the slightest interest at their return. Surely their findings were newsworthy?!

Things take a turn for the worse when Dieter’s condition deteriorates. Just then one of the most powerful A.I.’s in the world requests their immediate presence and offers compelling arguments for a risky mission to an unchartered system twenty thousand light years away. Could this A.I.’s theory about the origin of the alien they found at Planet X be right? If so, can they trust a fragment of this A.I. aboard the Full Advantage to have their well-being at heart, and for that matter, can they still rely on their own ship to bring them back safely?

And as if this mission didn’t have enough unknowns, Brad couldn’t deny the wishes of a dying man and has allowed Dieter to come along!