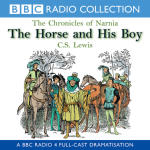 Chronicles of Narnia - The Horse and His Boy

Shasta has a lonely and hardworking life in the small fishing village in the south of Calorman and it is all that young Shasta knows until, one day, he overhears his father planning to sell him into slavery to a stranger. In desperation Shasta asks the horse about his master. To his surprise, the horse, Bree, replies! Shasta soon discovers that he is not a fisherman's son after all!

The seven titles in The Chronicles of Narnia, in order, are as follows: The Magician's Nephew; The Lion, the Witch and the Wardrobe; The Horse and His Boy; Prince Caspian; The Voyage of the Dawn Treader; The Silver Chair and The Last Battle.