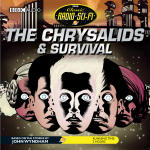 A double bill of John Wyndham stories adapted for radio.

Adapted by Barbara Clegg in 1982, The Chrysalids concerns the community of Waknut where it is believed that mutants are the products of the Devil and must be stamped out.

When 10 year-old David befriends a girl with a slight abnormality, he begins to understand the nature of fear and oppression. Then, when he develops his own deviation, he must learn to conceal his secret.

Survival is based on a short-story and was produced for a 1990's Fear on Four revival.

Set in the future, it concerns the first auto-piloted space flight. When the ship meets with an accident the human passengers are cast adrift in space. What will they do when their food supplies run out?