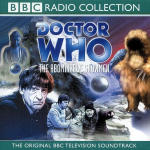 Doctor Who - The Abominable Snowmen

In The Abominable Snowmen, the TARDIS materialises in the snowy Himalayas, and the Doctor is astonished to find the Detsen monastery under attack, apparently from the Yeti which are said to roam the mountainside. Furthermore, he discovers that his friend the High Lama is still alive, his ancient body under the influence of an apparently unearthly force...