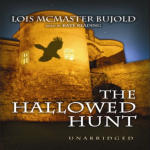 "Absorbing.Bujold's ability to sustain a breathless pace of action while
preserving a heady sense of verisimilitude in a world of malignant wonders makes this
big novel occasionally brilliantand not a word too long."
Publishers Weekly (starred review)

"Bujold's reworking of a classic romantic situation is distinguished by its setting in a
well-crafted world and masterly creation of characters whose fates will keep readers
turning the pages."Booklist

Lois McMaster Bujold returns to the vivid, perilous world of her previous masterworks,
the Hugo Award-winning Paladin of Souls and Hugo and World Fantasy
Award-nominated The Curse of Chalion, with this tale of devotion and strange
destiny.

The half-mad Prince Boleso has been slain by a noblewoman he had intended to defile.
It falls to Lord Ingrey kin Wilfcliff to transport the prince to his burial place and to bring the
accused killer, Lady Ijada, to judgment. His mission is an ugly and delicate one, for the
imminent death of the old Hallow King has placed the crown in play, and the road he
travels with his burden and his prisoner is fraught with danger. But in the midst of political
chaos, magic has the fiercer hold on Ingrey's destiny, and Ijada herself may turn out to be
the only one he dares trust.