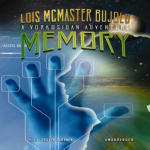 "Bujold fans of long standing will justly hail [this] as a masterpiece that
contains some of her finest prose and characterization. Bujold continues to prove what
marvelous genius can create out of basic space operatics."--Booklist

"Three novels in this series, including Mirror Dance, have won a Hugo for Best
Novel; expect a nomination, at least, for this compelling new one."--Publishers Weekly

"As ever with Bujold, Memory is a delight!"--Locus

Dying is easy. Coming back to life is hard. At least that's what Miles Vorkosigan thinks,
and he should know, having done both once already.

Thanks to his quick-thinking staff and incredible artistry from a medical specialist, Miles's
first death won't be his last. But it does take some recovery, a fact he has been reluctant
to admit. When he makes the mistake of returning too soon to military duty, he finds
himself summoned home to face the Barrayaran security chief, Simon Illyan. But Miles's
worst nightmares about Simon Illyan are nothing compared to Illyan's own nightmares.
Under suspicion himself, Miles must seek out the answers to Ilyan's nightmares or see
the inevitable destruction of Imperial Security and, with it, the Empire.