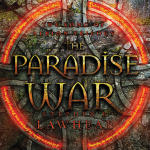 Lawhead treats his Celtic lore with respect; the upshot is well handled and pleasingly restrained, a solid and readable opener for the series.Kirkus Reviews

In an ancient cairn in the wilds of Scotland, Oxford student Simon Rawnson vanishes, seemingly into thin air. Where has he gone? Unsettling signsa mysterious Green Man, a Celtic circle chalked on the sidewalkpoint his roommate, Lewis Gillies, to an impossible answerand to an incredible destiny on the other side of a doorway between worlds.

There, where Celtic champions, magic, and treachery are woven together in the beautiful and brutal land called Albion, Lewis finds Simon. And there, schooled as a warrior, he is thrust to the front of a titanic struggle between light and darknessa hideous, onrushing darkness that would devour not merely a kingdom but two worlds.

Stephen R. Lawhead is an internationally acclaimed author of fantasy and imaginative fiction. Although born and raised in America, his research into Celtic legend and lore brought him to Oxford, England, where he now resides with his wife, writer Alice Slaikeu Lawhead, and their two sons, Ross and Drake.

Stuart Langton is an award-winning actor based in New York City. He works in theater, film, and TV and has narrated audiobooks for more than ten years.