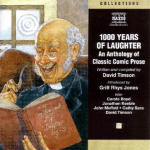 Laughter is unique to man. This delightful anthology presents some of the funniest extracts in English literature. It opens with Anglo-Saxon riddles - 'they couldn't keep themselves warm on a diet of Beowulf - and continues with medieval memories, Tudor comic turns and Restoration buffoonery. The rise of the novel in the 18th century brought classic humour from Swift, Sterne and Smollett, the mantle then passing to Charles Dickens in the 19th. Included here are rarities from the antiquarian's cupboard. Children's literature produced unforgettable images from Wind in the Willows and Alice in Wonderland, while in the first half of the 20th century emerged unforgettable comic writers as diverse as Dorothy Parker and P.G. Wodehouse. Entertaining from start to finish.

David Timson, is just an incredible author, and an amazing man.