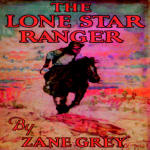 This is a story of Texas in the 1870s. After killing a man in self defense, Buck Duane
becomes an outlaw, a companion of the gunfighters and rustlers who live along the Texas border.

In a camp on the Mexican side of the river, he finds a young girl held prisoner, and in attempting to
rescue her, brings down upon himself the wrath of her captors. Henceforth, he is forced to live a
lonely life, hunted on one side by honest men, on the other by outlaws. This continues until a big-
hearted captain of rangers takes him into his camp, wins him a pardon, and makes him a ranger,
pledged to fight for the law rather than against it. The girl whom he attempted to rescue also finds
good in Buck.