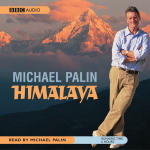 Hot on the heels of his adventures in the Sahara, Michael Palin takes on a 3,000-mile journey across the greatest mountain range on earth. Encountering extremes of wealth and poverty, altitude and temperature, he once again brings his unique wit, charm and wisdom to a geographical land which remains the world's most majestic natural border, and a meeting place of different cultures, religions and races.

Filmed over six months, Palin takes on the full length of the Himalaya (which is Sanskrit for 'Abode of Snow') including the Khyber Pass and the Silk Road, the hidden valleys of the Hindu Kush, the mighty peaks of Everest and K2, and the gorges of the Yangtze.

He passes through a fascinatingly mixed bag of countries: India, Pakistan, Bangladesh, Afghanistan, China, and secretive, unconquered mountain kingdoms like Nepal and Bhutan, as well as one of the most volatile regions in the world, Kashmir Along the way he encounters, amongst many others, the Dalai Lama, the Bhutanese Royal Family, and the once feared head-hunting tribe of the Konyak.

Even counting for illness, altitude sickness and political flashpoints, Michael Palin discovers a region permeated by every sort of human activity in a journey he describes as 'a wonderfully, magically, brilliant journey, with more gasps of astonishment per square mile than any other in my entire life.'