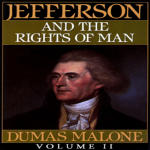 "Jefferson and His Time is a masterly achievement of scholarship, the
finest biography of Jefferson we have or are likely to have, and a monumental triumph
of the senior American historian."--New York Times Book Review

"Jefferson and the Rights of Man is better, even, than its predecessor, and that
is saying a great deal. What I like particularly is that Malone carries his great learning
so lightly, that he has, by some miracle, achieved something of Jefferson's own
combination of profundity and erudition and gracefulness."--Henry Steele Commager

The second of the six volumes of this Pulitzer Prize-winning biography tells the story of
the eventful middle years in the life of Thomas Jefferson: his ministry to France in the
years just before the French Revolution and during the early stages of that conflict; his
service as secretary of state in President George Washington's first cabinet; the crucial
period of his first differences with Alexander Hamilton; and the beginnings of his long
struggle with the Federalists.