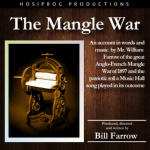 Being an account in words and music of the great Anglo-French Mangle War of 1897, and the patriotic roll a Music Hall song played in its outcome.

Both the script and music were writen by Mr William Farrow, that the great aging matinee idol and thespian (for which he is still taking the tablets) for your plesure and performed for money by the Mangle Theatre Company.

NOTE. It has been brought to our attention that some disbelieving hospital broadcasters doubt that any such war took place, and that this hilarious riot of fun and music is an entirely fictional load of porkie pies. Oh come on. How do you explain that the Fench never imported their Mangles into the UK. And nobody likes the French do They !

As a collective of artists, the Mangle Theatre Company don't beleive in the old out-dated practice of listing certain comany members along side the parts they portayed in this production, as this could give those with only small parts an inferiority complex.
Of course, the fact that the producer left it to the casting director to make a cat list and that person used the back of it a shooping list may have something to do with this rather crazy idea.
Indeed, as a delegation of cast members have been quick to point out, because certain people made sure their own names appear alongside their responsibilites, they can expect trouble come the cast party

So to all our very good friends, listed below - who played some part in this production - our grateful thanks for all your efforts.