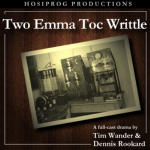 In early February 1922, from a small ex-army hut in a field just outside the Essex village of Writtle near Chelmsford. A small team or pioneering wireless engineers working for the Marconi company established Britain's first regular radio broadcasting station. In it's short year long history, the station using the call sign of 2MT, or as it soon became known to its many fans - Two Emma Toch, became a broadcasting legend. For led by Captain P.P.Eckersley, its engineers became it's on-air staff who in that short year on air, developed and establsihed most of the ground rules for broadcasting as we know it today. It's small wonder that apart from one engineer who stayed with Marconi, The others all went on to join and help establish the early BBC, which came on the air, almost a year later.

The theme music is taken in part from the work, Fisher's Boarding House by Percy Grainger and performed by the BBC Philharmonic and available on Chandos CD CHAN 9493