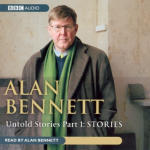 Alan Bennett reads from the first part of Untold Stories , his major collection of new writings

Untold Stones , Alan Bennett's first major collection of prose since his bestselling Writing Home , brings together the finest and funniest of his writing over the last ten years.

Part I: Stories
Untold Stories is a poignant family memoir recalling the marriage of Alan's parents, the lives and deaths of his aunts and the uncovering of a long-held family secret. At times heartrending, and at others extremely funny, Untold Stories is a matchless and unforgettable journey into Alan Bennett's past.

Alan Bennett's television series Talking Heads has become a modern-day classic, as have many of his works for the stage, including Forty Years On, The Lady in the Van, The Madness of George III (together with the Oscar-nominated screenplay The Madness of King George ) and an adaptation of The Wind in the Willows . The History Boys won the Evening Standard and Critics' Circle awards for Best Play, The Laurence Olivier Award for Best New Play and the South Bank Award .