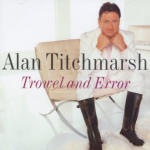 Trowel and Error read by the author.

With the engaging charm, warm humour and down-to-earth style that has made him Britain's favourite television gardener and a popular TV presenter, Alan Titchmarsh has now written 'a touch of the memoirs'.

Alan has been passionate about gardening for as long as he can remember. An avid fan of Percy Thrower, he announced to friends, aged 10, that one day he would be his successor. He admits now that he doesn't know how he had the nerve.

Brilliantly evoking the 1950s of his Yorkshire childhood, he takes us back to his playground at the foot of Ilkley Moor, where he fished for minnows with jam jars, spotted birds and discovered his first love - nature.

Few gardeners can boast of meeting Nelson Mandela and Bette Davis, Julia Roberts and the Queen. Fewer still can claim to be best-selling novelists. But whether he is writing about a visit to the Palace, or giving 'Pretty Woman' a gardening book, Alan Titchmarsh recounts his tales of 'a life on earth' with wry amusement and gentle self-deprecation.