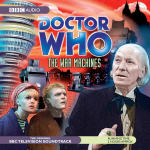 Doctor Who - The War Machines

The TARDIS lands in London in this classic TV soundtrack adventure, starring William Hartnell as the Doctor with linking narration by Anneke Wills.

‘There’s something alien about that Tower...’

It’s 1966, and London’s brand new Post Office Tower looms over the Doctor and Dodo as they step from the TARDIS.

When the Doctor meets Professor Brett, creator of a new, superintelligent computer called WOTAN, he is intrigued to hear of a plan to link all the major computers around the world.