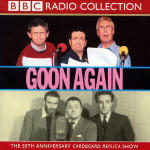 'Against all the odds... a brilliant tribute to a show that changed the face of radio comedy forever' --- The Stage

No-one can ever replace the Goons. But fifty years on the world needed them more than it ever had. and so the first ever GMTB - Genetically Modified Tribute Band - was created! And lo. in March 2001 a collection of vintage Milligan scripts were rescued, dusted off and remade for a 21st century audience.