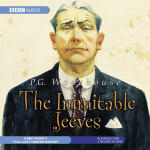 'Richard Briers and Michael Hordern... sensational in the main roles.' -- Time Out

Typical. Just when Bertie thinks that God's in his heaven and all's right with the world, things start to go wrong again...

There's young Bingo Little, who's in love for the umpteenth time and needs Bertie to put in a good word for him with his uncle; Aunt Agatha, who forces Bertie to get engaged to the formidable Honoria Glossop; and the troublesome twins, Claude and Eustace, whose antics when let loose in London know no bounds.

Add to that some friction in the Wooster home over a red cummerbund, purple socks and some snazzy old Etonian spats, and poor Bertie's really in the soup...

Only one man can save the day - the inimitable Jeeves.