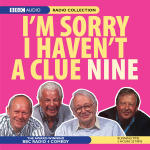 Inspired nonsense and pointless revelry - it's time for another helping of the antidote to panel games, I'm Sorry I Haven't A Clue.

In this ninth collection, the gang return for further moments of mayhem, puns and one-liners; not forgetting a healthy dose of innuendo and double entendre. Regulars Tim Brooke-Taylor, Barry Cryer and Graeme Garden - and special guests Jack Dee, Jeremy Hardy and Tony Hawks - are given silly things to do by chairman Humphrey Lyttelton.

So join Humph and company in these perennial favourites: New Definitions, Swanee Kazoo, One Song to the Tune of Another, Sound Charades and last, but certainly not least, Mornington Crescent. Other exciting rounds include Just a Minim, Swankers, In Their Own Words and 84 Chicken Cross Road.

With the lovely Samantha, bringing up the rear with her laser display board, this compilation is especially for you, Mrs. Trellis of North Wales.