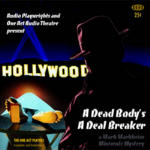 Dead Body's A Deal Breaker, A

DONT MISS THE SECOND CASE IN THIS SERIES: "VENGEANCE IN VEGAS".