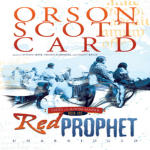 "Harsher, bleaker, and more mystical than Seventh Son, this
novel superbly demonstrates Card's solid historical research, keen understanding
of religious experience, and, most of all, his mastery of the art of storytelling."
Booklist

"Red Prophet is but a section of a vast American fantasy epic. It is vividly
written, and the principal actorsAlvin, Ta-Kumsaw the Prophet, and Alvin's
Gandalfesque mentor Taleswapperare all complete and memorable characters."
Philadelphia Inquirer

"Set in an alternate world steeped in natural magic, this sequel to Seventh Son
continues to demonstrate the author's love for American folklore. Recommended."
Library Journal

In this thrilling sequel to Seventh Son, Alvin Maker is awakening to many mysteries:
his own strange powers, the magic of the American frontier, and the special virtues of its
chosen people, the Native Americans.

Alvin has discovered his own unique talent for making things whole again. Now he summons
all his powers to prevent the tragic war between Native Americans and the white settlers of
North America.