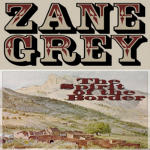 The Spirit of the Border

The American frontier in the 1700s produced some men of utter ruthlessness, and Jim Girty
was one of the worst. Living among the Delaware Indians in the Ohio Valley, Girty and his brothers incited
acts of savagery and war against the white settlers.

One of Jim Girty's targets was the Village of Peace, a settlement of Christian Indians who had been converted
by Moravian missionaries. Girty and his ruffians, playing on the fear and hostility of surrounding tribes, incited
them to gather at the village, where they threw the ominous war club on the ground.

Lewis Wetzel, a lonely, taciturn hunter whose family had been the victim of Delaware atrocities, swore revenge
on Girty. The intrepid Wetzel, called "Deathwind" by the Delawares, had saved Fort Henry from Indian attack,
but was he any match for the odious Girty?