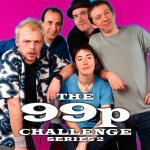 It’s back, the show they didn’t dare call King StupidSeries 2 !

The line up for this show is: Peter Baynham, Richard Herring, David Quantick and Simon Pegg  and was broadcast on 29th June 2000.

The producers are David Tyler and Sarah Smith, who between them are responsible for much of the best radio and television comedy in the last ten years, including Fist Of Fun, Radio Active, Jeremy Hardy Speaks To The Nation, The League Of Gentlemen, Spitting Image, The Friday Night Armistice, Pauline Calf’s Three Fights Two Weddings & A Funeral, Absolutely and Coogan’s Run.

The show is a  Pozzitive Television  production, whose radio credits include Sony-Award winners The Very World Of Milton Jones and Jeremy Hardy Speaks To The Nation and whose most recent TV credit is the much-acclaimed sitcom dinnerladies.