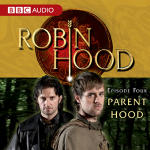 The Sheriff and his men capture Roy, and the outlaws find a baby abandoned in Sherwood Forest.

Roy is given a choice: kill Robin Hood or let his own mother hang. Meanwhile, Marian angers the Sheriff with her disobedience. Will Roy betray Robin? How will the Sheriff punish Marian? And who does the baby belong to?