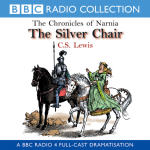 Chronicles of Narnia - The Silver Chair

King Caspian has grown old and sad in the ten years since the disappearance of his only son. With time running out, Jill and Eustace embark on a perilous quest to find the Prince and bring back tranquility to the magical land of Narnia.

Journeying to the wild lands of the north, the friends and their companion Puddleglum battle mighty storms and encounter a race of giants who would like nothing better than a tasty snack--of human children! Searching deep underground in the grim land of the Earthmen, they encounter the wicked Green Lady who has evil plans to overthrow King Caspian and become Queen of Narnia.

The seven titles in The Chronicles of Narnia, in order, are as follows: The Magician's Nephew; The Lion, the Witch and the Wardrobe; The Horse and His Boy; Prince Caspian; The Voyage of the Dawn Treader; The Silver Chair and The Last Battle.